Click here to submit your article
You are here: Home » Science and Technology » Pseudoscience » Are they chemtrails or contrails?

Are they chemtrails or contrails?

Chemtrails aren’t anything more than a daft made-up conspiracy theory, generally from individuals who must have failed high school science. The chemtrail conspiracy theory claims how the typical longer-lasting condensation trails (contrails) from jets are “chemtrails” which incorporate chemical or biological materials left in the skies and are sprayed for nefarious reasons. Those that believe in this concept (chemtards) claim that whilst regular contrails dissipate somewhat quickly, contrails that remain must consist of added chemical substances to ensure they endure longer. They imagine that the purpose of the chemical substance release might be for some threatening and not so threatening purposes which include management of solar irradiation, weather conditions manipulation, psychological adjustment, power over the human population, biological or chemical warfare. In addition, they believe that the chemtrails are creating respiratory ailments and other medical problems in the population.

Most of the assertions made can be easily replied to and the scientific community have discussed contrails and dismissed the conspiracy theory. There is certainly no evidence that the supposed chemtrails differ from normal water dependent contrails that are usually left by high-flying planes under certain atmospheric conditions. The conspiracy theory lasts in spite of experts and government agencies around the world having repeatedly spelled out that the supposed chemtrails are only in fact ordinary contrails. This doesn’t seem to have made any difference to people who rely on the conspiracy idea.

A way of thinking about it, is actually if it was genuine, then this would have to have been agreed to by each and every nation in the world. Each and every main airline globally would have to say yes to spray chemtrails. This could involve large numbers of jet pilots in addition to airport terminal personnel, climate forecasters and observers, each and every University having a meteorology or environmental physics department and every business which monitors air quality. They will all have to agree to remain silent. This would be an remarkable worldwide task and co-operation which the person who is behind it, if it was true is worthy of a Nobel prize. No one who believes in the fringe movement of chemtrails (ie the actual chemtards) has been able to reveal how this remarkable co-operation is functioning with nobody spilling the beans on it.

Yet another way of thinking about it can be just the national infrastructure of dispensing the chemtrails if it was correct. Many experts have estimated what would be needed to just spray the United States with the presumed chemicals that are claimed by the chemtards to be used. It had been calculated that the federal government will have to timetable four million 747 flights to distribute their chemicals each week for this to work. That is eighteen times additional air flights per day compared to the whole US. On top of that their would need to be the infrastructure and staff to support such a massive enterprise (that is going to also need to keep quiet as to what they are doing). Additionally, this will only be for the USA plus a equivalent system will be necessary for each and every nation on the planet. None of those believers in chemtrails may be capable of clarify this. 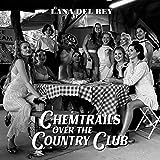 Chemtrails Over The Country Club [LP]
$28.97
Buy on Amazon
SaleBestseller No. 2

Chemtrails, HAARP, and the Full Spectrum Dominance of Planet Earth
$15.79
Buy on Amazon
SaleBestseller No. 3