Click here to submit your article
You are here: Home » Entertainment » Music » Accordions are increasing in popularity

Accordions are increasing in popularity

Although the mainstream music world has often relegated accordions to second-class status, squeezeboxes are once again coming into their own. Making appearances in productions ranging from those of Cirque du Soleil to albums from top name rock stars, the accordion’s unique sound is getting some well-deserved attention.

Although most people can conjure up a mental picture of an accordion, many do not realize that there are several different kinds of accordions, developed over the years for specific musical genres. As free reed instruments, the opening and closing of an accordion’s bellows (or squeezebox) causes the air to flow over the reeds, which makes the sound. An accordion also has buttons, or both buttons and a keyboard. These serve to direct the airflow to certain reeds and not others, thereby controlling the tones played.

Some accordions have one row of buttons; some have two rows of buttons; and still others have three rows. Accordions with one row of buttons include the Hohner Concertina and the Hohner Ariette. The latter is often used for playing Cajun, Quebecois, Zydeco, and Irish folk music. These buttons typically play the diatonic scale, with each button able to play two notes: one when the bellows is squeezed in and another when it is spread apart. An accordion with one row of buttons is often tuned for the type of music being played. For example, certain reeds may be filled in order to produce the sounds typically associated with Cajun music. The Hohner Ariette, for instance, has ten treble buttons, two bass buttons, four sets of treble reeds, and three sets of bass reeds.

One of the most beautiful aspects of accordions is that they can’t be completely mass-produced and assembled. Like other fine musical instruments, the handmade components (in the case of accordions, most notably the reeds) are what give the instrument its unique sound.

There’s no doubt that the accordion has traveled far from its stereotypical uses as an instrument for polkas. From Cajun and Zydeco to Klezmer and Classical music, from Lawrence Welk to Sheryl Crow, accordions are here to stay. 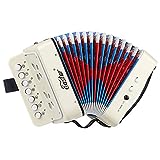 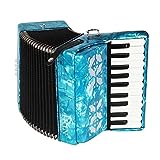