Click here to submit your article
You are here: Home » Health and Fitness » Conditions and Diseases » Orthopaedic » Foot Problems » What is the Austin Bunionectomy?

What is the Austin Bunionectomy?

Bunions or hallux abducto-valgus are a very common problem and typically surgical treatment is the only way to get rid of them. That doesn’t mean the pain cannot be managed with out surgery and this might involve braces, exercises in addition to using wider footwear. Even so, these non-surgical methods will likely not typically remove bunions. The particular condition of a bunion along with the progression of hallux valgus can be quite complex. Due to the contribution of so many different bone, ligaments, muscles and joints and their contribution in differing amounts, there is not one surgical procedure intended for bunions. You will find surprisingly a really large number of options which surgeons have for surgical procedures to take care of a hallux valgus or bunion. Many experts have touted that there are more different surgical procedures for bunions than you can find for almost any problem in any other part of the human body.

One of these surgery’s for bunions is called the Austin Bunionectomy that is much less commonly called and more correctly identified as the distal metatarsal osteotomy. This Austin bunionectomy is a procedure performed to the bones in which the bunion is corrected by relocating or sliding over the top of the metatarsal . This requires the cutting the bones and modifying the bones location. The Austin Bunionectomy is generally utilized to eliminate the prominent lump of the bone (the bunion) as well as release a restricted tendon that tends to pull the big toe in the direction of the next one. The osteotomy or bone cut is near the joint, so it will be effective if the end of the metatarsal should be realigned. The Austin bunionectomy is not for everybody having a bunion or hallux valgus as there are so many different bones and problems that might be taking part in each bunion. It is not going to be used in bunion which have a lot of angulation of the metatarsal bone as it does not reposition that. There are different operations which can be used to fix that. A choice of procedure would be determined by how much of each one of the various bones and ligaments are implicated as well as the experiences of the individual doctor. By way of example, in the event the bunion is larger, a Lapidus surgery could be performed.

Following the Austin Bunionectomy, weightbearing is generally allowed early using a surgical boot but you will need to take it easy temporarily. Healing with the metatarsal bone generally can take approximately 6 weeks when things go okay. After that initial 6 weeks, footwear wearing along with exercise levels may be gradually increased as they can be tolerated. The Austin bunionectomy is usually well tolerated with minimal additional complications that are generally very easily taken care of when they happen. Most of these complications include the non-healing of the metatarsal bone cut. Occasionally there are other structures that get overloaded when you start being active again and they can be painful as you become used to the new foot structure and positioning. The Austin bunionectomy is not something that you could ask your surgeon for as there are many factors which get used in the choice as to which is the ideal one to suit your needs and your bunion.

Textbook of Bunion Surgery
$199.23
Buy on Amazon
SaleBestseller No. 2 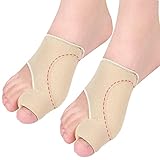 Fixing Bunions Without Surgery: How To Avoid Ending Up With Feet Like Your Mother
$4.43
Buy on Amazon